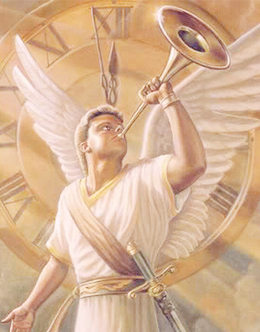 The seven seals are the way the first process for the annihilation of humanity have begun. The first four seals opened as each Horseman makes his/her decision to side with darkness.

Broken by Rose Arvale on 2008, after murdering the wife of Dr. Charles Hart (the man whom she had her affair) in act of jealousy and keeping her wedding ring as a souvenir.[1]

Broken by Senator Cindy Richards after signaling a sniper to try to assassinate the Prime Minister of Afghanistan.[2]

Broken by the Abaddon hacker Leland Schiller when he attacked a Nero office despite failing on his attempt to destroy that same company for denying a treatment for his dying mother.[3][4]

This seal was broken by Mark Plowman, when he shot his brother Vincent.[5]

This seal was previously broken in July 16, 1945, as a consequence of the nuclear bomb tested in Trinity Site.[6]

The seventh seal broken will cause the Rapture. Never coming.

The seven seals is a phrase in the Book of Revelation that refers to seven symbolic seals that secure the scroll. When the first seal is opened the Four Horsemen of the Apocalypse are summoned, each with their own specific mission. The opening of the fifth seal releases the cries of martyrs. The sixth seal prompts earthquake cataclysmic events. The seventh seal cues seven angelic trumpeters who in turn cue the seven bowl judgements and more cataclysmic events. [8]

The order the seals were broken in the series (Death - War - Pestilence - Famine) is very different to the order that was featured in the Book of Revelation (Pestilence - War - Famine - Death).

Retrieved from "https://themessengers.fandom.com/wiki/Seven_seals?oldid=7442"
Community content is available under CC-BY-SA unless otherwise noted.