The Man is a main character and the male antagonist in The Messengers. He is portrayed by Diogo Morgado.

Originally an angel of immense power, Lucifer was cast out of Heaven for rebellion and has since waged a silent war of guile and manipulation to spite God and torment humankind. The Man is a cryptic character whose arrival coincides with an unidentified object falling from the sky into the New Mexico desert. He is first seen crouched in the impact site with no clothes and his skin burnt. The Man is working against The Messengers who are trying to prevent the impending Rapture.

Despite his intimidating and confident demeanor, Lucifer still fears the power of God and will flee whenever his plans are thwarted, his deceptions are revealed, or when the power of God is invoked to frighten him away, as seen in Awakening when Rose Arvale realized who he was and spoke in an old tongue which clearly frightened him. 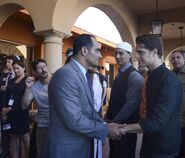 Retrieved from "https://themessengers.fandom.com/wiki/Devil_(The_Man)?oldid=7439"
Community content is available under CC-BY-SA unless otherwise noted.